Last Tuesday 7 June, the European Union adopted its Integration Action Plan of Third-Country Nationals. The Plan provides a comprehensive framework to support Member States' efforts in developing and strengthening their migrant integration policies, and describes the concrete policy, operational and financial measures the European Commission will implement. Discover the Plan 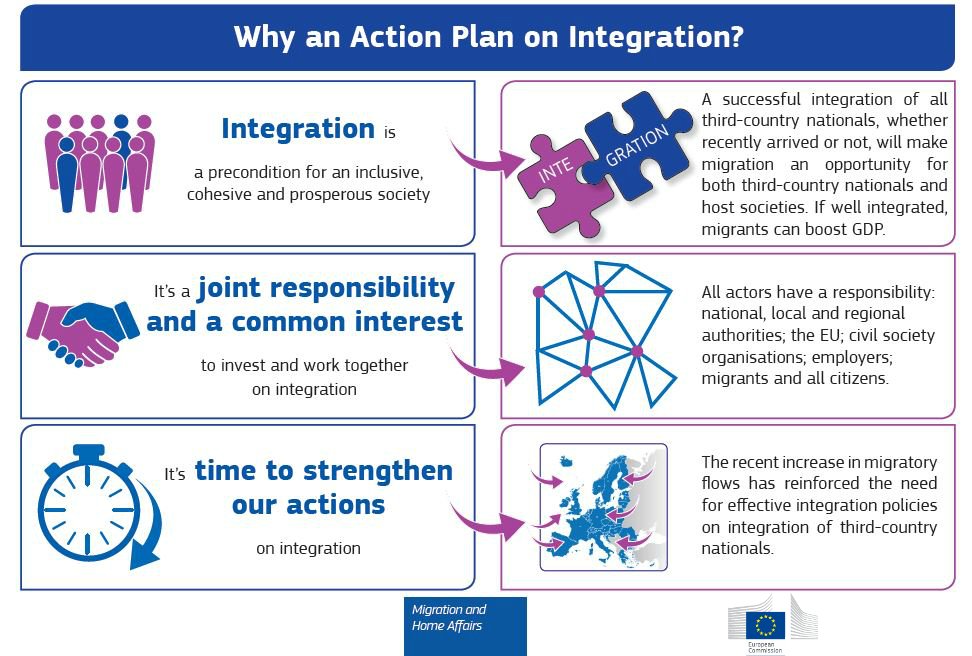 As a first step after the approval of the new Action Plan, the homepage of the European Web Site on Integration will be simplified to ease navigation so that users can quickly find the information they are looking for. See further changes

On 24 May, the European Council held its second annual rule of law dialogue with a focus on the challenges that the current migratory flows create for the safeguarding of the EU's fundamental values. Ministers stressed the importance of respecting EU fundamental values when receiving refugees and recalled that these values have also to be respected by refugees. Read more

On 30 May, the informal Ministerial meeting on urban matters agreed on the "Pact of Amsterdam", which sets out the principles of the EU Urban Agenda for multilevel governance. The Pact's aims

Anti-immigrant sentiment is on the rise, says Council of Europe Anti-Racism Body

According to the annual report of the European Commission against Racism and Intolerance (ECRI), the commitment of many European countries to human rights-oriented migration policies was brought to the test in 2015. Scepticism about the local ability to cope with the increasing number of migrants and asylum-seekers was voiced, against the background of openly xenophobic and Islamophobic public debate and a number of attacks against reception centres. Further trends

Brussels - Launch of the Knowledge Centre on Migration & Demography

On the occasion of World Refugee Day, the Knowledge Centre on Migration and Demography, an initiative of the European Commission's Joint Research Centre, will be launched on 20 June 2016. The event will be headlined by various Commissioners, including First Vice-President Timmermans,…

Athens - A series of public discussions on "Xenophobia and hate speech"

The Bodossaki Foundation, Fund Operator of the EEA Grants Greece, together with Youthnet Hellas, the local partner for the Council of Europe's campaign No Hate Speech Movement, is organising a series of discussions about different stereotypes and actions that reinforce hate speech in…

The European Commission is organising a conference on the integration of asylum seekers and refugees on 22 June 2016 in Brussels. Best ways to integrate refugees in European labour markets and specific social integration needs of refugees will be the main focus of the conference. As there is a…

Rome - Seminar on experiences of refugee reception in private homes

Brussels - Launch of the New Skills Agenda for Europe

Greece: EC approves 56 million euros to improve the hosting of refugees and migrants

The European Commission announced on Friday that it had approved 56 million euros in emergency funding to improve Greece ability to host migrants and refugees. 13 million euros will be split between the Interior Ministry, the Administrative Reform Ministry and the National Asylum Service to…

A ruling by the Administrative Court of the Lazio Region (TAR del Lazio) has stated the illegitimacy of the tax imposed for the issuing and renewal of residence permits of third-country nationals regularly residing in Italy. The tax was introduced by a Ministerial Decree , undersigned by the…

Poland: Launch of the information campaign ‘I do not pay for work’, targeted at Ukrainian workers

According to the results of a research conducted by the recruitment agency OTTO Polska and the University of Business in Wroclaw, as many as 60% of Ukrainian interviewees declare to have paid to take up job in Poland. This means that thousands of Ukrainian workers have potentially been deceived…

Malta: Law on racial hatred to be updated

A court case heard on 13 May 2016 highlighted an outdated Maltese law on the incitement of racial hatred. A Maltese prison warden incited racial hatred against refugees in Sweden in his comments on Facebook, saying that he hoped they were burning inside a shelter, could not be condemned…

Portugal: Applications for the 2nd edition of the "For Cultural Diversity" Communication Award now open

The High Commission for Migrations announced today 3 May, on World Press Freedom Day, the 2nd edition of the Communication Award "For Cultural Diversity". In order to promote cultural diversity in the media, this award intends to reward work on the integration of migrant and Roma communities…

At the end of 2011, when a special contribution scheme for domestic workers, mostly immigrant women, was established, there were 686,900 people engaged in domestic work; out of which, 248,916 (42.9%) were affiliated in the Spanish Social Security system. Although membership has since grown…

On 13 May 2016, the OECD presented its report about the Swedish integration policy at a seminar in Stockholm. The report  Working together – Skills and labour market integration of immigrants and their children  shows that Sweden has a well-developed and sustainable asylum system…

Netherlands: Majority of newcomers do not fulfil their civic integration requirements

The new Civic Integration Act which came into force on 1 January 2013 states that newcomers are responsible for the preparation they might need in order to pass the compulsory integration exam. Since then, the number of newcomers who have taken and passed the integration exam…

Austria: Foreigners are net contributors to the welfare system

30% of the population believes that immigrants receive more social benefits than they contribute to the financing of services. This opinion is most pronounced in Austria in comparison to most European countries, as shown in data from the European Social Survey (ESS). The Ministry of Social…

RTÉ, the national public-service media organisation, is preparing a new strategy on diversity, in which it hopes to address gaps it admits currently exist in this critical area. Diversity is already addressed to some extend in the Broadcasting Act 2009  which requires public media to…

The Parents’ Integration through Partnership (PIP) project was an multi-strand project set up by the social enterprise specialised in Adult learning Learning Unlimited. The project was designed to support the language learning and integration of non-EU mothers of school children at partner…

The 2016 edition of the Civil Society Prize, annually delivered by the European Economic Social Committee since 2006, will focus on migrant integration. The Committee will reward initiatives carried out by civil society organisations and/or individuals and aimed at improving migrants' lives and…

On 12 May 2016, the Ministry of Interior opened a new call for proposals under the Asylum, Migration and Integration Fund ((AMIF) 2014-2020 – BG / AMIF - SO2 - NO2 - A2 Providing administrative and legal consultations and medical, psychological and social assistance to third country…

The Right of the Child to Family Reunification, advocacy brief by UNICEF

UNICEF's advocacy brief The Right of the Child to Family Reunification provides an overview of the EU standards, namely the EU family reunification directive , and international standards, particularly the UN Convention on the Rights of the Child, the gaps in national legislation and…

Forgotten Women: The Impact of Islamophobia on Muslim women

This European comparative report discusses the impact of Islamophobia on Muslim women in the field of employment and hate crime. It is based on eight national reports from Belgium, Denmark, France, Germany, Italy, the Netherlands, Sweden and the United Kingdom, following research conducted…

Impact of the Refugee Crisis on Bulgarian Society and Politics: Fears But No Hatred

This nationwide opinion poll conducted by the Bulgarian office of the Friedrich Ebert Foundation demonstrates that, in Bulgaria, the attitude towards refugees is ambivalent and susceptible of being strongly influenced by public messages. The Bulgarian society is charged with…

The European Web Site on Integration is present on social networks, with dedicated country accounts on Twitter and Facebook.

Subscribe to these accounts by clicking on the links below and stay up-to-date on integration news!